Dagfin Kjølsrud at the Kunsthall in Kristiansand 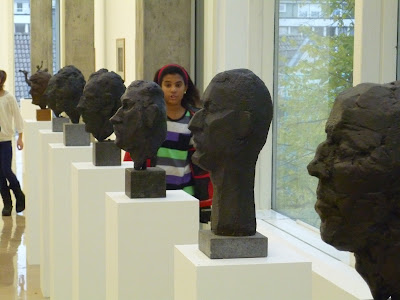 Born in 1930 and with an intens working period untill his much too early death in 1974. Dagfin Kjølsrud has left a bit of an embarrasing scar with the people of his own town. Not much appreciated then, too much struggling and when the attention came it was too little, too late. Keep wondering if he would have been a grand old man now in his eighties, if he had had the sense to move to Oslo, or to stay in Kopenhagen. 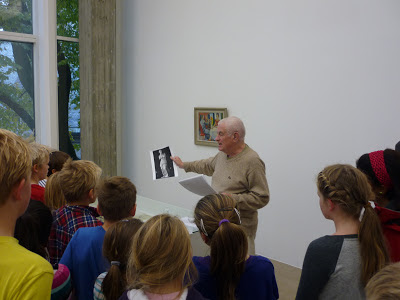 The writer Gunvald Opstad does a tour with school children as a part of the 'Kulturelle Skolesekken'. Here he gives them a crash course in the history of sculpture. Someone from Milo gets all the attention: where did the arms go??? 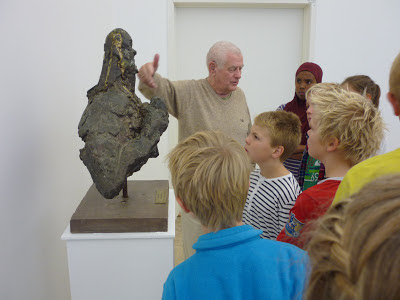 Here Kjølsruds 'Eventyrfortelleren' is being presented. Looks a bit different than the sculptures of the great storyteller H.C.Andersen (here in Central Park). In fact, the sculptures by Kjølsrud do remind one more of the works of Daumier in its caricature ways. 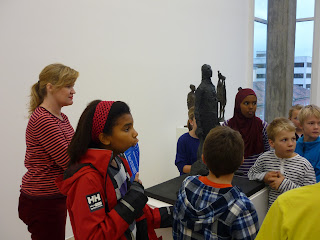 Mister Opstad is also a Storyteller, and keeps the attention of kids and grown-ups. Here with 'Slaktescene'. The abstractive ways of portraying the human also reminds me of Rodin and his monument to Balzac. 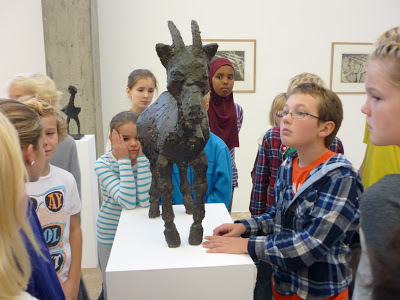 'Drektig Dverggeit' is a very charming piece. When someone once teased Kjølsrud with its similarities with a certain goat by Picasso, he got a fist in his solar plexus. The two goats are of course very different. Kølsrud has clearly gone another direction in his portrayal of the animal, where the abstraction of the surface has been a theme. About the goat of Picasso, one can read that the artist used different tools from the scrap heap where a wicker basket form the rib cage and two ceramic jugs the utters. Goats are anyway seemingly a favourite object for artists to portray. I don't blame them. They are fabulous animals. Rauschenberg assembled a famous goat. This one by Malen Pierson is a more recent portrayal of that dear animal. 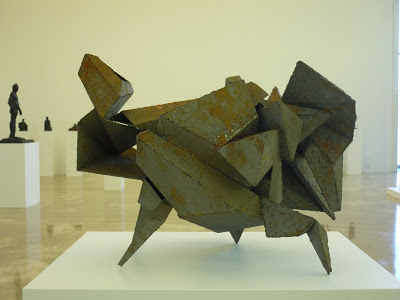 This, 'Farlig dyr', is really one of my favourites! Perfect cubist sculpture. Fairly intellectually put together. The rusty metal and the welded joints bear witness of craftmanship. It is an earlier piece than the goat, the butcher or the storyteller. The piece stirs the imagination directly on the level of interpretation. Also an interesting thought: what if he had chosen this path? 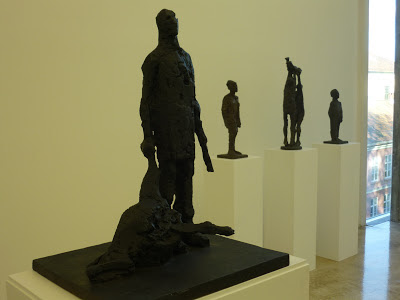 Getting a better view of 'Slaktescene', one of the allegedly most important and strongest works of Kjølsrud. 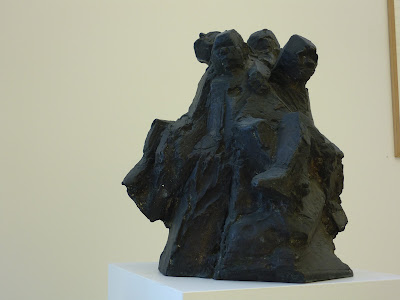 Full of humour, 'Tø min plass', or 'Dibs on that seat', triggers the emphatic sense. Easy for kids to understand the sense of competition, and a clear portrayal of a cubist study. We settled for the scene of 'Dibs' ,and not necessarily the cubism when they made their own attempt of sculpturing. 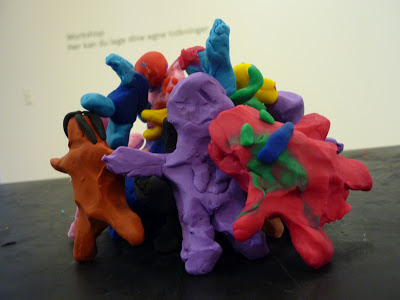 Here is 'Tø min plass' portrayed by one of the schools visiting. 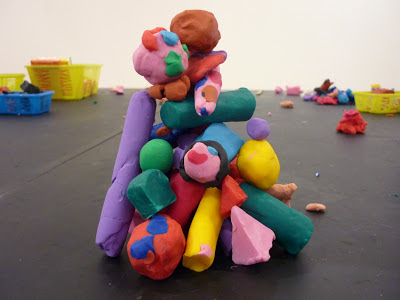 They also made an attempt to make a cubist sculpture. Next time I will bring the satay-sticks!! Only makes you respect the sculptor even more!
Lagt inn av arteriet kl. 13:41