1st of September 2012 Christiansand Kunstforening became Kristiansand Kunsthall. That is quite a big step, and a change that will define many of the artistic and curatic choices that will be made in the future. Kristiansand is a still growing city and the focus will inevitably move from an inward to a more open outwardlooking profile. Only exciting news! Here some of my own shots from the exhibition. More photos, and definitely more professional photos, can be found on this link.

Game of Life: Etter Rutenettet. Curated by Jan Freuchen and Sigurd Tenningen
(a selection of works only) 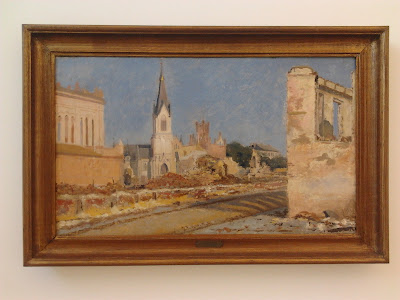 Olaf Isaachsen painted motives of the city in ruins after the fire of 1892 (oil on canvas). Pupil of Courbet, but quite an impressionist style, and according to the curators at the start of a journey of abstraction in the 20th century artworld. 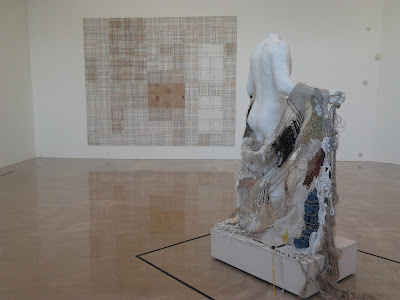 Here we dive right into it, Not Yet Titled (2012) by Else Marie Jakobsen, well known weaver here, Ann Cathrin November Høibo and Tori Vrånes. Installation standing before Beirut (2000) by Kjell Mardon Gunvaldsen. 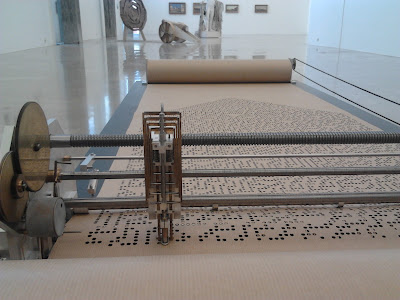 Regel 30 (2008) by Kristoffer Myskja. An analogue machine. From a set of rules, complex and seemingly random patterns are produced. One of the elementary cellular automaton rules introduced by Stephen Wolfram in 1983 (Wolfram 1983, 2002). It specifies the next color in a cell, depending on its color and its immediate neighbors. Its rule outcomes are encoded in the binary representation

. This rule is illustrated above together with the evolution of a single black cell it produces after 15 steps (Wolfram 2002, p. 55). 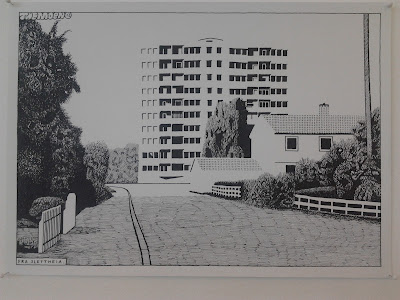 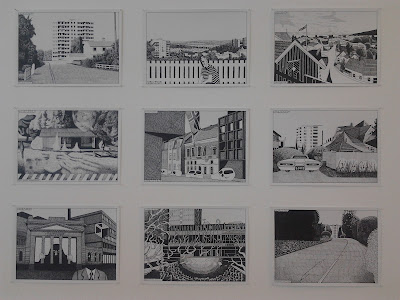 The Moen (Terje Moen), Diverse tegninger (2012). Triggering the sometimes ambivalent feelings of coming back to ones birthplace... He does it beautifully! 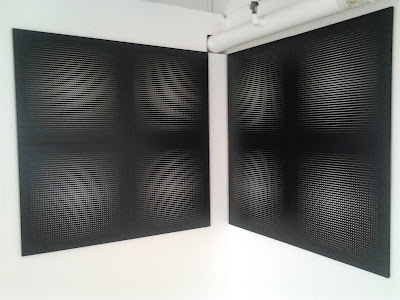 Gridlock (2012), Dirkjan van der Linde. Dutch artist. I like it. His other works are even better. Check out his website here. 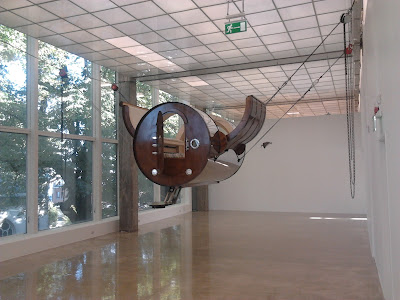 This work by Erik Pirolt is one of the great and fun features of this exhibition, according to my own  taste. Paradisteleskopet (2012) is a hanging livingmachine, for the occasion with an accompanying seagull wearing headphones. What I found so charming with this installation is its friendly, humorous and welcome atmosphere. The Dutch artist Joep van Lieshout has also been busy with the cities and living for many years, but his approach is more that of a problemsolver, creating new problems as he goes. The solution of Pirolt is a happy, dreamy solution. I like that. 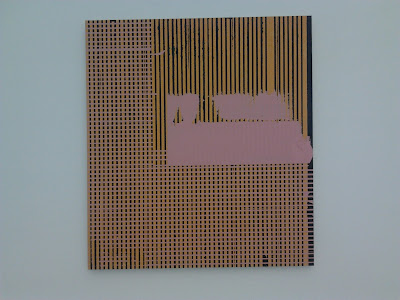 Sorry for the askew photographing of Display Unit (center) 5 by Øystein Aasan. Here you can find his portfolio. I really enjoy his modesty. Clean cut aesthetic and I also think he is extremely stubborn. I like that. 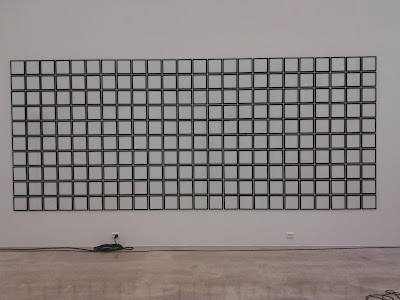 An Incomplete Account of Past Sensations (2012) by André Tehrani. Aceton and pencil on paper, map based on Wikipedia´s list of riots in the 20th century. Tehrani's website here. 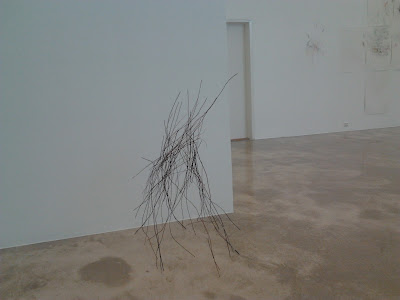 Finally, Anngjerd Rustand, Landskap med tekst (2012). Pencil, paper, copper. The unstructured lines fascinate me. They carry their own power. I do not understand why she insisted on bringing in a written message between the pencilwork. I enjoy extremely though the forceful statement of the intwined lines, both copper and on paper\wall.

There are still some days left of the exhibition. About Game of Life and the road to abstraction, not only in art, but also in science. Even if this theme, how art meets science and cityplanning in abstraction, might be more an idea of the curators than specifically the artists that were invited: as a statement it works for me. I can enjoy the the suggestion of a change of imaginary focus in such a well built up exhibition.